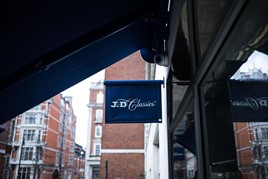 A&M managing directors Mark Firmin, Richard Beard and Richard Fleming were appointed to the Essex-based operation which has encountered financial issues after a classic car collector who claimed to have “suffered catastrophic losses” during the trading of 41 vehicles begun legal proceeding against former owner, Derek Hood.

Hood was replaced by Jean-Marc Gales, the former chief executive of Lotus Group, back in June and Gales is said to have identified ‎a number of potential cost savings and growth opportunities for JD, but A&M are now searching for new investors.

A Sky News report last month said that lenders are understood to be facing a loss of as much as £25m on its exposure to the company‎.

A statement issued by A&M this week said that it was continuing to find a buyer for the business and was in discussions with an interested party around a potential sale.

Firmin said: "Whilst JD Classics has now entered administration, the business continues to trade. We are hopeful that a sale can be achieved in the next few days, ensuring the ongoing employment of the workforce.”

“The Company benefits from an outstanding collection of cars, a bespoke restoration facility and a team of world class craftsmen and engineers. We have informed employees about the process today and will continue to keep them updated on developments. We are grateful for their hard work and support during this time.

“We will be contacting customers, creditors and parties with cars currently being restored or situated at the premises over the next few days.”

Back in April AM reported how tycoon Mike Tuke had begun proceedings to sue JD Classics boss for around £9 million after alleging that Hood had invented fictitious buyers and sellers to boost its sales profits on more than £40 million worth of vehicles.

Court papers revealed that Tuke, an engineer from Guildford who sold his Finsbury Orthopaedics business for over £60 million in 2009, bought an array of rare cars from JD Classics between December 2009 and March 2013 as an investment.

Mr Justice Lavender concluded that Hood, who did not give evidence in court, had engaged in “deliberate and dishonest conduct” concerning representations made as to the ownership of a Jaguar Lister Knobbly, by claiming that it was owned by the potential buyer of a Jaguar XKSS when it was in fact owned by JD Classics.