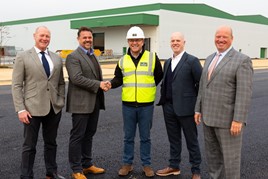 Aston Barclay has completed a deal to open a new auction centre at Wakefield’s Photon Park - a 16-acre site set to sell 50,000 in the coming year

Developers, and owners of the site, Illuminating Investments, have agreed a long-term lease that sees Aston Barclay occupy and invest in both existing buildings built in 2016, as well as over 10 acres of development land that will provide car storage and preparation areas.

The site is situated close to junction 31 of the M62 motorway at Normanton.

Illuminating Investments’ director, David Aspland, said: “The use of the site for such a world leading facility is fantastic news for the area, and the commitment and investment Aston Barclay have shown in delivering their vision has been outstanding.”

Working in close collaboration with Wakefield Council’s Inward Investment team, Aston Barclay will create up to 150 jobs at the facility, which will include technology that will create the most modern car sales site in Europe.

The company have ambitious plans to sell over 50,000 cars from the site in the coming year.

Cllr Denise Jeffery, Cabinet Member for Economic Growth and Regeneration said: “We are pleased to have provided our support to Aston Barclay as they prepare to move to their new site in Normanton.

"It is always positive news when we can welcome companies that are offering new job opportunities in our district.”

Wakefield Council’s economic development service manager Mike Denby said: ''I am delighted that such a prime site has been occupied by a company looking to work with us and recruit from the local area.

"Aston Barclay join a prestigious list of recent world class occupiers in the region including Bosch, Haribo and HSBC. The area is thriving with a new generation of businesses.”