JD Classics founder Derek Hood to be sued by creditor 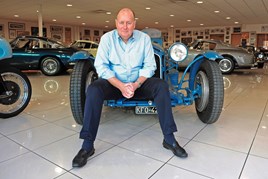 The 58-year-old sold his majority stake in the Essex-based business, which went bust in September last year, back in 2016.

But, according to a report in The Times newspaper, scrutiny of JD Classics’ accounts revealed that, while the cars on its books had a mark value of £106 million, alleged “financial irregularities” led to a large write-down of its inventory by private equity firm Charme Capital.

The Times reported that, in legal documents issued last week, Hood had marked up the price of a string of vintage Jaguars in order to “create the false appearance of a vibrant market” and to inflate their value for potential buyers.

Now the Charme Capital is jointly suing Hood and his wife, Sarah.

In a statement issued to the newspaper, a legal adviser to Mr Hood described the allegations as “bizarre”, claiming that the business’ professional financial advisors would have spotted such wrongdoing.

Hood denies the allegations against him.

In April last year Derek Hood was taken to court by former customer Mike Tuke, of Guildford, who claimed to have “suffered catastrophic losses” during the trading of 41 vehicles.

Sitting at the High Court at the time, Mr Justice Lavender concluded that Hood, who did not give evidence in court, had engaged in “deliberate and dishonest conduct” concerning representations made as to the ownership of a Jaguar Lister Knobbly.