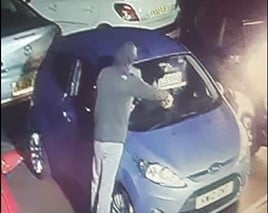 Footage from CCTV cameras has been made public in a bid to help track down an arsonist pictured pouring flammable liquid over several vehicles at a Northumberland car dealership before setting them alight.

A total of 10 cars were written off during the attack on independent used car retail operation the Village Car Centre on Morpeth Road, Ashingdon, just before 11.30pm on Saturday (October 19), and images of the incident have now been released as part of an appeal for information.

“It's too well coordinated, too well thought out. It has to have been a targeted attack.

“Somebody is trying to put us out of business.”

The joint owner of Village Car Centre, Rachel Gascoigne, told the newspaper that her "heart sank into her boots" when she was alerted of the latest fire at the used car dealership.

Firefighters spent an hour extinguishing the flames at the business, which is co-owned by Mansel Wetherell and first opened four years ago on the site of the former fire station.

A spokesperson for Northumbria Police said: "An investigation has been launched and inquiries into the cause of the fire are ongoing but at this stage it is being treated as arson.