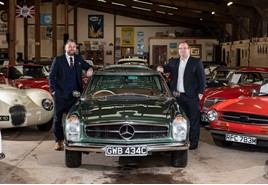 The Malton-based family-run classic car business, which was established 28 years ago and is run by James Szkiler – son of founder Nick Szkiler – has used the new funding to purchase new premises to develop the new facility, which will provide additional space to house its restoration, servicing, body and trim division, Malton Coachworks.

Work on the neighbouring site is set to be completed in Q1 2021.

James Szkiler, the chief executive of Classic & Sportscar Centre, said: “Since beginning a radical business growth plan five years ago, I have been focused on diversifying and developing our operations in a sustainable yet ambitious way.

“We’ve reached a point now where we are ready to take a significant strategic leap forward and the financial support we have received from HSBC UK enables us to do this.”

In the last four years, the Classic & Sportscar Centre has grown its turnover by 200% through its business of sourcing, restoring and selling iconic models, such as the Jaguar E-type, Ford Mustang and Aston Martin DB6, across the UK and globally.

Its new funding deal comes as part of a HSBC UK lending fund of £1.05 billion, which is being deployed to support small and medium-sized enterprises (SMEs) in Yorkshire.

Classic & Sportscar Centre plans to recruit ten new members of staff and scale-up its stock of rare and sought-after collector’s cars by 30% as part of its growth plans.

The business expects to deliver a 25% increase in turnover in the next 12 months following the changes.

Stephen Smith, business banking relationship manager for North & West Yorkshire at HSBC UK, said: “This is an established business which has built a reputation in the region and across the UK for its expertise in sourcing and restoring rare classic and sports cars.

“Its plans for growth and expansion are built on a success story spanning more than a quarter of a century.

“We’re pleased to have been able to assist James and the team with their expansion plans and look forward to continuing to support them in the future.”