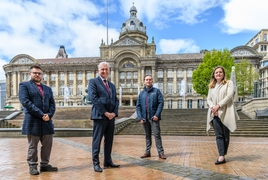 Officially launched today (May 12), the scheme is open to motorists who work in the city centre for at least 18 hours a week and earn less than £30,000-per-year, handing them £2,000 towards transport credits or a newer car from the used car supermarket when they scrap an older, more polluting vehicle.

Those wanting to upgrade their vehicle – rather than access to the city’s Travel Scheme credits – will be directed towards Motorpoint’s used car supermarket sites in Aston and Oldbury.

Kevin Cartwright, general manager for both sites, said: “We’re delighted to see the Clean Air Zone Vehicle Scrappage and Travel Scheme go live and with it the opportunity to further reduce the levels of nitrogen dioxide emissions in the city.

“Motorpoint has hundreds of low mileage, nearly new vehicles all under warranty available at its branches across the city – every one of which is Clean Air Zone compliant.

“Plus, with our Sameday Driveaway service, people can choose, test drive and buy, all in the space of a couple of hours. We would definitely recommend anyone thinking of taking advantage of the scheme to go online and start their car buying journey at motorpoint.co.uk or alternatively pop into their nearest Motorpoint branch.”

Questioned on Birmingham City Council's decision to appoint a sole car retail partner for the vehicle scrappage scheme, a spokesperson for the authority told AM: "We undertook a full and thorough tender scoring process when considering a partner for the Vehicle Scrappage and Travel Scheme, which Motorpoint were successful in.

"All of the cars sold by Motorpoint are compliant with the Clean Air Zone emission standards."

Toyota, Kia and Mazda are among new car franchised networks currently operating their own scrappage schemes, delivering savings of up to £4,000 off new, low emission vehicles.

Miliband also suggested that a new national scrappage scheme should be introduced as part of efforts to deliver on the UK’s ambitious Road to Zero plan to reduce CO2 emissions, claiming that Government was currently “asleep at the wheel” in its facilitation of the shift to EVs.

In a statement issued by Birmingham City Council, as it launched its own scrappage scheme today, Cllr Waseem Zaffar, the authority's cabinet member for transport and the environment, said: “Every year, up to 1,000 people in Birmingham are dying prematurely from conditions linked to air pollution including cancer, heart and lung disease. This is an unacceptable situation.

“Clean air should be a basic right, not a luxury and just because it is invisible it does not mean we should ignore it.

“The Clean Air Zone will help improve air quality within our city and the Vehicle Scrappage and Travel Credit Scheme helps tackle the source of the problem by removing the most polluting vehicles from our roads.”