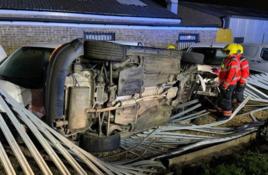 A used car retailer estimates that he has been left with a bill of around £50,000 after a crashed car overturned onto his dealership forecourt – damaging a number of vehicles.

Cambridgeshire Constabulary have issued an appeal for information following the incident in which the vehicle collided with fencing at Christopher Andrew Cars Ltd, on the Fenland Industrial Estate, Whittlesey, earlier this month.

Cambridgeshire Live reported that no arrests have been made, despite more than a fortnight passing since the incident occurred on the 40mph stretch of road between 7pm and 8pm on March 7.

Hartwig, who was initially alerted to the incident by a staff member, said: “It was quite dangerous really... I don't know how they managed it.”

Hartwig said that around £40,000 worth of damage had been caused to vehicles, with a further £10,000 investment needed to repair the fencing and other damaged items.

The crashed vehicle was left abandoned after the collision and the driver could not be located, despite the attendance of police dog handlers.

Issuing an appeal for information into the incident, Cambridgeshire Constabulary said: "Anyone with information about this incident should contact police via their web chat service or online forms at www.cambs.police.uk/report quoting incident 411 of 7 March. Anyone without internet access should call 101."

Back in January AM reported that a used car retailer in Huddersfield that saw £250,000 worth of used car stock written-off after a high-speed police chase ended in a Volkswagen Golf somersaulting across his forecourt had been told he must foot the bill.

James Hodges, marketing and social media manager at Huddersfield-based ENKAE has revealed that the business will not receive a penny for the £80,000 Mercedes C63S AMG, £72,000 Audi RS5 or two Mercedes A45 AMGs destroyed in the incident after West Yorkshire Police closed its case.