Was this article useful?
Click the thumbs up >
Jaguar’s make-or-break XK8 Mk II is undergoing trials at the Nurburgring, as development intensifies ahead of the sports coupe’s launch in early 2006.

Don’t be fooled by the XJ saloon bodyshell: this is an XK prototype, likely testing the R’s supercharged engine. Its identity is betrayed by Jaguar’s classic sports grille, low-set and oval-shaped, and the engine cooling vents bookending that power bulge in the bonnet. Little else is clear, although the mule suggests the single unit headlamps of today’s XK8 will continue.

Given Jaguar’s current problems, every model is make-or-break. But the XK8 has assumed even greater significance: it will be the first Jaguar shaped by design boss Ian Callum, and the first built by the restructured company (in a different factory, Castle Bromwich).

Although insiders describe it as progressive and edgier, they are damping down expectations that the MkII will be a design revolution. “The XK8 was Geoff Lawson’s finest work: we will be careful to hang onto its core styling characteristics,” Jaguar chairman Joe Greenwell told AM.

The revolution comes under the skin, with today’s XJS-based architecture ditched for the aluminium monocoque construction introduced by the new XJ. Key components – such as the air suspension and steering rack – are shared. With its lighter weight, the MK II, codenamed X150, will deliver sharper handling, better fuel economy and quicker acceleration.

The XKR is tipped to run the supercharged 4.2-litre V8, with peak output in excess of 400bhp. A naturally aspirated 4.2-litre bent eight will also be offered. Don’t rule out a BMW 630Ci-challenging XK6, possible thanks to the architecture’s light weight. However, Greenwell blanched at the suggestion of a diesel-powered XK.

Today’s cramped cabin will be banished, too. The X150 gets a more flexible driving position and more space, although the 2+2 seating configuration remains. It also gets the XJ’s user-friendly, touch screen dash.

Expect the coupe to make its debut at the Frankfurt show in September 2005. A convertible version should follow around a year later. 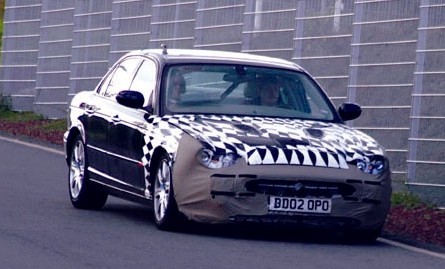 Jaguar has confirmed that X150 will be all-aluminium, sharing the lightweight technologies developed for the new XJ.