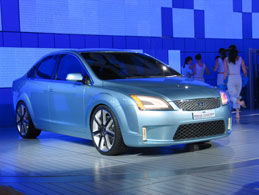 Ford’s Asia Pacific region stole the thunder of the company’s European division by revealing the next Focus three months earlier than had been planned.

Its efforts to provide the surprise of the Beijing Auto Show took the limelight from the reveal being planned by Ford of Europe at the Paris Motor Show in September.

Described at a ‘teaser’ by region executive vice president Mark Shulz, the new car is noticeably bigger, sleeker and more sophisticated than the current best-seller.

Shown as a concept, but admitted by officials to be ‘very close’ to the next generation production model, the new focus has a more sporty appearance.

‘We put it on the stand here to reflect the level of commitment we have to the Chinese market. We are aiming this model to appeal to a new generation of car buyers, ‘ says Ford Asia Pacific design manager Paul Gibson.

Gibson says: ‘It is very similar both in form and style to our next production version. We regard this as an evolution car because the ingredients were right first time around. That has enabled us to concentrate on adding refinement and sophistication,’

Shulz added: ‘China and Asia Pacific are now the epicenter of global growth in our industry and mid sized cars are the core of these markets. This show is a key competitive arena for the next generation focus.’