Was this article useful?
Click the thumbs up >
Lexus will use the Paris Motor Show to display both its latest future concept car, the LF-C (pictured) and to showcase two new production models which will be launched in Europe in 2005: the new generation GS and the hybrid power RX400h.

In addition, the Lexus stand will also focus on revisions to the current model range, including the development of DVD-navigation systems with Bluetooth wireless technology for the RX300 and SC430.

The vehicle is the third in a series of concept studies that have been created to express a new Lexus design rationale, following on from the LF-S and LF-X models presented in Tokyo last year. The LF-C showcases elements of styling and technology that are anticipated in the next generation Lexus IS model. The car is constructed on a rear-wheel drive platform with a front-mounted V8 engine. The principle feature of the body is a retractable hard top that can be moved through four different positions. The roof is fully automatic, controlled by the touch of a button, and stows neatly away through a surprisingly narrow opening in the boot. 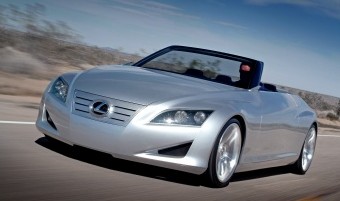 In Europe the GS will go on sale during the first half of 2005, offered with a choice of the Lexus 4.3-litre V8 or new 242bhp 3.0-litre V6 petrol engines. Both power units are matched to a new, close-ratio six-speed automatic transmission with sequential shift mode. The Adaptive Variable Suspension lets the driver choose between two damper settings to suit driving style and road conditions. The GS has been created with the express aim of achieving class-leading safety performance. It benefits from Vehicle Dynamics Integrated Management (VDIM), which enhances performance, traction control and vehicle stability. Further contribution to safety is made by the radar-controlled Pre-Crash Safety system (PCS), which automatically ensures optimum emergency braking performance and pre-tensioning of the front seatbelts. 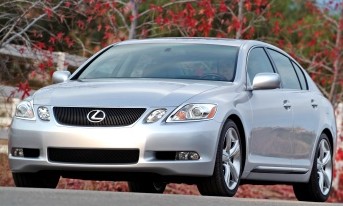 The RX400h is powered by Lexus’s Hybrid Synergy Drive, a full hybrid system that allows the vehicle to operate in petrol or electric mode alone, or in a combination of both, according to driving conditions. This produces a combination of high performance, quiet drive, frugal fuel consumption and ultra-low carbon dioxide emissions for its class. The car can accelerate from rest to 62mph in 7.6 seconds, yet in combined cycle driving can match the fuel consumption of a typical family saloon with a four-cylinder petrol engine.

The powertrain comprises a conventional 3.3-litre V6 petrol engine with front and rear electric motors, together delivering a maximum power output of 268bhp.

European sales of the Lexus RX400h will commence in the first half of 2005.