Was this article useful?
Click the thumbs up >
Don’t be deceived – that’s no regular Ferrari 612 Scaglietti attacking the Nürburgring. It’s a prototype for the 575 M Maranello replacement, tipped for a world premiere at the Detroit Auto Show in January.

Whispers suggest that the new Ferrari could be called the F600, named after the 6.0-litre displacement of its V12 engine. While 612 S runs a 5.7-litre engine producing 540bhp, the updated V12 should be good for 575bhp.

The F600 is based on a cut-down version of 612 S’s platform. Some six inches of aluminium have been sliced from the wheelbase to convert the four-seat Grand Tourer to a two-seater. The body panels will be made of aluminium, too, to keep weight down. Expect a sub-1800kg weight – some 200kg less than Bugatti’s Veyron.

The V12 is sited well back in the nose, in a front/mid-engined position, to quicken turn in. It’s part of Ferrari’s plan to make the distribution of weight close to 50:50 front:rear. Power is sent to the rear wheels via an electro-hydraulic transmission. It can be manually operated by wheel mounted paddles, or left in automatic mode for cruising.

The prototype may have the 612 S’s grille and lamps, but the F600 will have a bespoke body, guided by Ferrari’s chief designer, Frank Stephenson, the man behind today’s Mini. 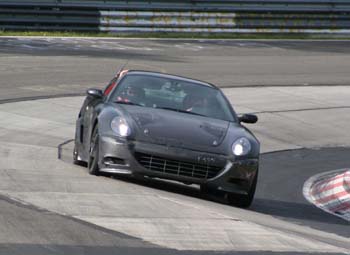 F600 uses a cut-down version of the 612 Scaglietti’s aluminium chassis.

Ferrari’s latest V12, bored out to 6.0 litres, and kicking out an impressive 575bhp.

The 612 S look is a red herring: the F600 gets its own bespoke aluminium body panels