Was this article useful?
Click the thumbs up >
Chevrolet managing director Andy Carroll is in bullish mood. Despite a lacklustre placing in the summer RMI dealer attitude survey – a result blamed on an unrepresentative six responses from the network – Carroll reckons the company is in great shape.

Ten months after it was rebranded from GM Daewoo to Chevrolet, sales are starting to recover and the retail network is growing. In fact, Carroll announces: “Now’s the time for dealers to get into Chevrolet. Eighteen months down the road and it will be too late.”

This self-assured optimism could be put down to Chevrolet talking itself up in a bid to attract more dealers. It has glaring open points in key territories like north-west London, Birmingham south, Milton Keynes and North Oxford and suffers a ‘chicken and egg’ scenario where rising sales attract more dealers, but it needs more dealers to raise the sales.

The company has worked hard to get the brand recognised and accepted. It needs to lay the foundations for a big product push in the second half of next year. And it does have some justification for its upbeat stance.

“We have gone from desperately seeking dealers to having a choice of better quality dealers,” says Carroll. “We want the right locations and believe multi-franchised sites will give us metropolitan areas. We are benefiting from being part of the GM family because we can piggyback off Vauxhall or Saab dealerships.”

Chevrolet is adding one dealer per month to the network – currently 90 outlets with 50 partners – and is confident of filling the gaps as it moves towards an optimum network of 120-125 dealers over the next couple of years. Pendragon is its biggest partner with six sites, likely to rise to eight outlets within six months.

But the mix of single, dual and multi-franchised showrooms can create problems. Carroll claims some dealers do not understand the need for a different approach to financial and operational control. “It’s important that one franchise doesn’t subsidise the other,” he says. “When costs are shared, it’s hard to determine the viability of the franchise.” 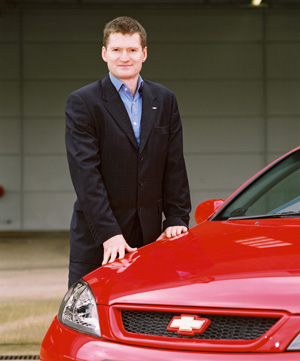 #AM_ART_SPLIT# Contributing to the bottom line

“The network contribution to dealers’ bottom lines was £50,000 in the first half of the year – that extrapolates to £100,000-120,000 for the full year,” says Carroll. “Some sites are losing money but that’s not necessarily Chevrolet’s fault – it’s more likely down to failings in the dual franchise.”

Gross profits per new car are up year-on-year to around £800 including bonuses, while on used cars it’s about £500-600. Dealers can expect to make a 12% business margin, with 5% at risk on standards, including facilities, processes and training.

Carroll says the standards are “reasonable”, and claims that “it’s easy for dealers to make all the money”. A quarterly volume-based programme adds “icing on the cake”.

Recent years have seen performance stutter due to uncertainty during Daewoo’s collapse and subsequent acquisition by GM. However, as the network expands, Carroll is confident of growth between 20-30% in both 2006 and 2007, taking sales above 30,000 units.

Those ambitions will be aided with the launch of diesel products for the first time next year, giving Chevrolet a path into the fleet market – 65% of its sales are presently retail. The plan is to join Saab in becoming part of the GM UK fleet.

Carroll measures brand performance by consumers’ purchase consideration (CPC). Last year GM Daewoo’s CPC was 4% - that is, four out of 100 people would consider buying one. The target this year is 6%, although Chevrolet is slightly off, at 5%.

That’s despite a major promotional push, which has seen publicity as diverse as roadside billboards to sponsorship of ITV’s Celebrity Love Island. Carroll also runs external events with the sole purpose of getting people into cars. “These are excellent for awareness and we have very high conversion rates,” he says.

Next year new corporate identity will be launched, but Carroll insists it will be in keeping with a value franchise. He says retailers understand, pointing to a European survey which shows Chevrolet rated No 2 in the UK on a 25-strong sample.

“There are only two or three dealers that are dissatisfied with what we are doing,” Carroll adds. “As the Johnny come lately, we can’t overmandate.”

Chevrolet is expanding its UK model line up. An SUV, due to be unveiled at Geneva, goes on sale mid 2006, competing in the Hyundai Tucson, Kia Sportage market. It’s the first all-new car since GM acquired the company and is described by Carroll as a “big milestone”.

Next summer, the UK will get the face-lifted Evanda, the Vectra-rivalling family car, for the first time. Lotus has helped developed the engines for European driving tastes. In Q4 of 2006, the Lacetti gets its first diesel engines.

“We will also expand the range further into new segments,” says Carroll. “We will look at other parts of the world, like Latin America, for Chevrolets that we might bring to the UK.”

From UK launch, Daewoo owned its dealerships and promised no quibble service. Slump was caused by the change to a franchised network, then problems in Korea.