Was this article useful?
Click the thumbs up >
Mazda will go Lexus RX300 hunting with its CX-7 crossover, captured undergoing hot weather testing in the States.

And the vehicle is nigh on a carbon copy of the MX-Crossport, the concept car unveiled at Detroit last January.

Mazda has made little attempt to disguise its looks, which feature numerous sports car styling cues. So the CX-7 has pumped up wheelarches à la RX-8 and a sleek glasshouse, with a distinctive kink in the shoulderline.

Twin pipes protrude through the rear valance, and the big grilles are packed with honeycomb mesh. The sporty details are to try to justify Mazda billing the SUV as a crossover: an off-roader with a sports car soul.

The bonnet also has an MX-5 style bonnet bulge, hinting at sporting engines. Sources suggest that the CX-7 will run the 6 MPS’ 2.3-litre four, which employs a turbocharger to yield 256bhp.

Officially Mazda hasn’t confirmed that the SUV will ever land in UK showrooms, but sources confirm it’s a done deal for spring 2007. Diesel power will be essential for Europe, so expect the 141bhp 2.0-litre turbo-diesel to figure and maybe the 2.3-litre in 164bhp, naturally aspirated form, later.

At around 4,630mm-long, it’s bang on an X5 in size, and has five seats and a decent-sized boot. The CX-7 is spun off the 6 saloon’s platform, so expect handling and refinement levels more like a car than a utilitarian mud-plugger.

The SUV has full-time four-wheel drive, with torque distribution varied between the axles depending on conditions, as in the 6 MPS.

Power is transferred to the rubber via six-speed manual and automatic gearboxes. 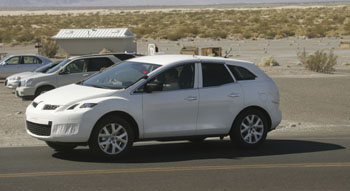 CX-7 spun off the 6 saloon’s platform, so expect decent ride and handling.

The launch engine is Mazda’s turbocharged 2.3-litre; expect a 2.0-litre turbodiesel to follow.