Was this article useful?
Click the thumbs up >
Speed bumps that flatten out for drivers who keep to the speed limit could soon be introduced by councils across the UK.

The ‘intelligent’ Transcalm bumps, made of rubber, include a valve system that detects vehicle speeds and remain rigid for those breaking the limit.

Dunlop, which developed the system in association with Cambridge University, is in discussion with local authorities including Birmingham and several London boroughs and plans to install up to 1,000 before the end of next year. It claims the bumps, which cost between £2,500 and £4,000 each, have ‘none of the disadvantages of conventional road humps’.

Motorists have long complained of damage to their cars from solid humps and bus drivers have sued councils over back injuries. The London Ambulance Service estimates that 500 lives are lost each year due to increased response times, which it attributes largely to speed bumps.

The Transcalm humps, which have been successfully tested in the City of London, deflate regardless of speed for emergency vehicles.

“They eliminate stop-start driving so cars use less fuel and as they’re made of rubber they are less likely to damage vehicles,” said a Dunlop Transcalm spokesman. “We have had a lot of interest from councils in this country and in Denmark and Sweden.” 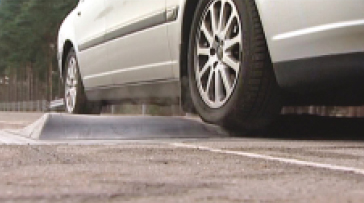