Was this article useful?
Click the thumbs up >
Advance offers for the new Zafira range, which does not go on sale in the UK until July 23, have already reached 140% of the initial sales target set by Vauxhall.

The public launch of the all-new Zafira will take place on July 23-24 at a series of Open Weekend events being held at all the 450 Vauxhall dealerships nationwide.

Vauxhall this week would not put any official numbers on how many Zafira MPVs had been ordered.

David Pugh, Vauxhall’s group product manager, compact cars says: "Publicity already received from the UK press about the new Zafira has created a healthy demand. Most of the initial orders have been placed by current Zafira owners and we expect to sell around 50,000 in a full year of sales.

"With so many new Zafira models going out to current owners our dealers will have a healthy supply of used models for would-be first time buyers". 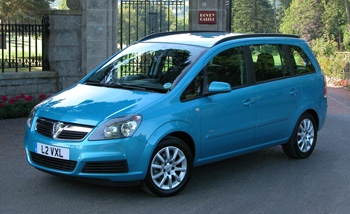 Vauxhall says all new Zafira models across the range will have higher specification, better interior quality, more interior space yet they will cost less by between £350 and £850. Prices will range from £12,995 to £20,445.

"The Zafira started life in the UK primarily as a retail car but now 65% of all sold are to the fleet, business and user-choosers sectors. The addition of an automatic transmission option for the 1.9 CDTi 120bhp model is likely to give the Zafira a big sales lift in the longer term.," says Pugh.

Vauxhall expect diesel Zafiras to account for 60% of sales and think the best selling petrol model will be the 1.6-litre version which it expects to account for 28% of all sales.

The Flex7 seating system will be retained.

Expression, Life, Club, Design and SRi equipment and trim specifications options are available, depending on the choice of engine. The innovative panoramic sunroof option with four blind covered panels and extra storage compartments adds £850 to the retail price.