Spy Shot: A Golf to take on the Freelander

Was this article useful?
Click the thumbs up >
This Golf Plus on stilts is Volkswagen’s mule for a Freelander rival, due to hit showrooms from autumn 2007.

Dubbed Marrakesh by insiders, the five-seat soft-roader is a member of the Golf family. But its butch bodywork – hinted at by the bluff nose and extended wheelarches on the prototype – will be bespoke. Expect it to look like a smaller, funkier version of the successful Touareg.

Under the skin, the Marrakesh is a mix of Golf and Passat components, including the new multi-link rear suspension. And the four-wheel drive system shares much with the Golf 4Motion, so it’s front-drive most of the time, with a Haldex clutch sending power to the rear when needed.

With the Marrakesh relying on established VW parts, the engines are mounted transversely. That means an engine bay with room only for four and six-cylinder engines.

The engines will be coupled to regular six-speed manual and automatic transmissions. VW also plans to offer the double clutch DSG ’box.

Originally, the Golf SUV was due to share a platform with Audi’s forthcoming Q5, a five-seat SUV to take on BMW’s X3. However, Ingolstadt baulked at the transverse engine installation and the lack of air suspension, and went its own way for the Q5’s underpinnings. 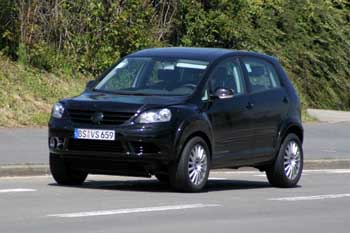 Don’t be fooled by the Golf Plus on stilts look: the SUV gets bespoke, pumped up bodywork to give it a butch look.

The SUV uses VW’s 4Motion system: mostly front-wheel drive, with power to the rear when slip is detected.