Was this article useful?
Click the thumbs up >
Clive Sutton believes he has developed a retail model that will ensure smaller franchised dealers and independents can guarantee a future in car sales, despite the growing strength of national groups.

Based at his St Johns Wood dealership, a former ChryslerJeep franchise, is Clive Sutton Premier Marques, a business which sources prestige new and nearly new cars such as Aston Martins, Ferraris and Bentleys, from dealers, brokers and private sellers to sell on to customers at a premium.

Sutton established the business last year after withdrawing from the franchise set up. He sold the bulk of his former company to existing management, retaining a stake in the renamed Capital ChryslerJeep.

“In a few years time, manufacturer bosses will look into a room and there will be five or six CEOs of big £2bn-plus plcs who will be dictating terms and future policy because they will have swallowed up the rest,” Sutton says.

“Manufacturers have raised the bar on standards too high for most dealers and it’s an approach that will leave the marketplace with a handful of dealers.”

But he believes it’s not doom and gloom for smaller companies – they just need to think about retailing in a different way. “The franchised model works for larger groups, but for smaller independents, Premier Marques shows how they can stay involved in selling cars,” Sutton says.

“We offer a franchised dealer-style operation so we have paid for stock and we broker forward deals, but we only do so for vehicles that either we or our clients want to buy. And because we’re not franchised, we are not forced to take slow moving models. We have a customer pull rather than push operation and that means we make money from new cars.”

#AM_ART_SPLIT# He adds: “This could mark a return to two level distribution. The only thing left is for the industry to recognize this form of dealer and to define standards for a code of practice to safeguard consumers. Perhaps it’s something the RMI should look at.”

Premier Marques’s seven employees are called associates and are responsible for every aspect of the customer relationship. They do not have sales targets, but profit objectives per cars. “We are here to make a profit, not to sell in volume,” says Sutton.

The business sources around 70% of cars from franchised dealers, with the rest split between brokers, a few imports (including Hummers and Mustangs from America) and private individuals. It’s all about reading the market trends.

“A lot of people order cars speculatively – they place orders on models they believe they can make money on by reselling,” says Sutton. “We also have to read the market to buy cars from dealers or privately at above list prices and sell on for even more.”

So if customers are willing to pay more, why don’t dealers sell on cars themselves at the higher price?

“Franchised dealers are supposed to keep to the recommended retail price,” says Sutton. “But while manufacturers want a consistent offer across their networks, people are happy to pay more for something that is in short supply.”

But it’s not all about the cars in the showroom; Premier Marques acts as a personal shopper, matching cars to owners. This concept led to the development of the internet-based Car Configurator, which enables customers to build their own car, specifying equipment, trim and colour. Premier Marques then finds a match.

It is now offering the service to other dealers for a £150 monthly subscription as part of the Car Configurator Club, a joint venture with car pricing guide Cap, which hopes to sign up to 1,000 subscribers. “It gives franchised dealers the opportunity to make some money by being able to quote on any car, even if it is not their franchise. It will be ideal for groups with several franchises,” says Sutton.

He believes there is an opportunity to expand his concept of boutique-style premises to other parts of the UK, with Manchester, the south coast and the West Country suggested locations. Other operations could target specific sectors, such as 4x4s or MPVs.

“This model is a franchise kit that can be replicated elsewhere and there is no shortage of offers from financial people to help fund expansion,” Sutton says. 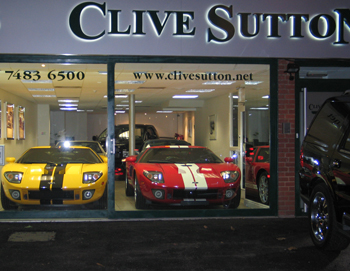 Sutton set up his first automotive retail business in 1985 as a non-franchised independent selling Jaguars. It was a time when Jaguars often went wrong, so Sutton adopted what he calls a “Japanese cooking approach” by showing people under the bonnet.

“By explaining what might go wrong and by selling a preparation package as part of the deal, people became more confident about the product,” he says. It’s a tactic used today by the United Auto Group, the American owner of Sytner.

In the early Nineties he took on his first franchise, Jeep, then imported by Inchcape, before adding Rover in 1994 and three years later Cadillac. “I found that GM was not set up to launch Cadillac effectively,” Sutton says. He took on the Jaguar franchise at the same time and by 2000 had a £60m business with 130 staff working across eight showrooms and an aftersales facility.

It was the wrong size. “There was no future in being a group this size. I considered raising funds to expand but the Rover business had no future, so I sold it.

Meanwhile, I could see Jaguar being integrated into the PAG set up, which was heading towards plcs and large territories so I did a deal with Sytner. It was with reluctance, but it was the right decision,” says Sutton.

“That left me with three ChryslerJeep dealerships – but the economics of this business in London were questionable. Post-block exemption there were more opportunities in a more liberal market, so I sold the dealerships and set up Premier Marques.”

And, he adds: “In effect, I’m a poacher turned game keeper turned poacher.”