Was this article useful?
Click the thumbs up >
Here is the next chapter in the Rolls-Royce story, as written by custodians BMW: the Corniche.

The convertible was caught testing, not on the roads surrounding Rolls’ Goodwood base, but near BMW’s Munich HQ. The production car is nigh on identical to the 100 EX, the centenary show car unveiled two years ago amid firm denials that it would ever see the light of day.

It sure will, with an unveiling scheduled for Paris in September, followed by deliveries in 2007. The model is expected to revive the Corniche badge.

The land yacht concept remains in all its imperious glory. At 5.6m it’s vast, but 200mm shorter than the ‘regular’ Phantom limousine. No folding tin-top here, but a traditional R-R fabric roof so multi-layered it should offer the refinement of steel.

It may be a sporty two-door, but they are rear-hinged just like the stately Phantom’s back doors. Perfect for turning heads as you disembark in St Tropez from that luxurious interior. The cabin is decked out in bleached teak, like a yacht’s, with four cosseting leather seats and a dashboard sharing much with the Phantom’s.

That gently tilted grille – the most rakish in Rolls-Royce’s ramrod straight history – signifies that the Corniche is for driving, not being driven in. It’s slightly more wieldy than the Phantom, with a 100mm shorter wheelbase as well as those reduced overhangs. Under the skin lurks a modified version of Rolls-Royce’s aluminium spaceframe chassis, which gives it a 300kg advantage over the Maybach.

Naturally the Rolls-Royce has reserves to make Fort Knox blush, although the concept’s 9.0-litre, 16-cylinder engine isn’t crammed into the nose. Instead, the Corniche runs the same Phantom’s drivetrain: 6.7-litre V12, yielding 453bhp and 531lb ft of torque, linked to the back wheels via a six-speed automatic gearbox. 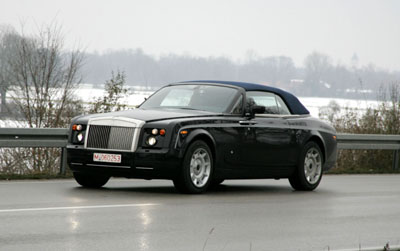 Spaceframe is a cut-down version of the Phantom’s, with a shorter wheelbase and overhangs.

The engine is shared with the Phantom, a 453bhp 6.7-litre V12 coupled to a six-speed automatic ’box

Dogmatically faithful to the 100 EX concept car, with its raked grille, aluminium accents and fabric roof. 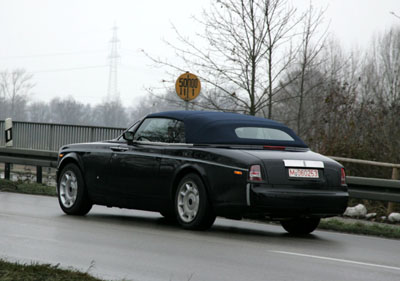