Was this article useful?
Click the thumbs up >
Average values for fleet & lease cars hit record levels in September, breaking the £7,000 barrier for the first time, while values in August fell below the £6,500 benchmark for the first time in six months.

A large spike in demand saw average fleet & lease values rise by nearly £1,000 between August and September, according to the latest data from BCA.

Across the third quarter as a whole, average values in the fleet & lease sector were just £14 behind last quarter’s record-breaking figure of £6,625. Q3 was 4.8% ahead of the same period in 2005.

In Q3 2006, prices for the three-year-old, 60,000 mile car averaged £6,611 – down just £14 on last quarter’s record breaking figure and the second highest average quarterly value recorded for fleet & lease stock in nearly three years. With average mileage rising by over 1,400 against last quarter, this would more than account for the small drop in value. Year on year, the rise is a more substantial £305, equivalent to 4.8%.

Average performance against CAP Clean by fleet & lease cars increased by 1.5 points to record the highest figure this year. It is also notable that Q3 has proved the highpoint in terms of CAP values for the past three years.

#AM_ART_SPLIT# Unsurprisingly given the frantic activity in the market over the past few weeks, fleet & lease used values were highest in September, establishing a new record by quite some distance. Month on month, average values rose by nearly £1,000 to £7,190 in September, eclipsing the previous record of £6,720 established a year earlier in September 2005.

Compared to last year, July 06 was also relatively strong, being some £650 ahead of 2005. It was also the sixth consecutive month that average fleet & lease values had exceeded £6,500 – a benchmark that was only reached once in the whole of last year. August – traditionally one of the quieter months for business in the wholesale market – lived up to expectations, with values falling to £6,250, the lowest average value recorded since January.

Looking back over 2006, average prices for fleet and lease vehicles are following a very similar pattern to that seen last year, but at a discernibly higher level. 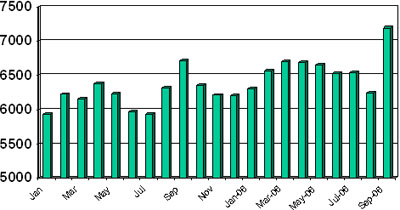 Looking at the diesel/petrol splits in the fleet market highlights that diesel continues to enjoy a significant premium over petrol, despite generally being sold at a much higher mileage.

In Q3, diesel recorded its best performance against CAP over the last 12 months achieving an average of 98.1% against CAP Clean – with petrol cars recording exactly the same figure.

Average price for diesels fell marginally – down by £56 – while petrol values averaged £6 higher against last quarter. The price differential between diesel and petrol product at remarketing time currently stands at just over £400– around 6%.