Was this article useful?
Click the thumbs up >
Fleet and lease values remained steady in November, recording a small fall against October, but well ahead of the values achieved last year. In fact, average values are over £350 higher in 2006 to date.

Average performance against CAP Clean by fleet & lease cars improved by a full point to 97.2%, but still remains behind the 100% benchmark achieved in September.

BCA’s communications director Tony Gannon said: ‘With one month to go, 2006 is shaping up to be a strong year for used car prices, even if volumes are not quite as expected in the wholesale market.’ 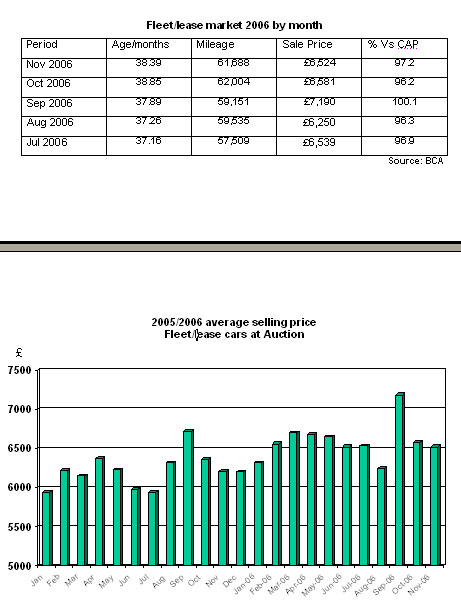 Diesel values converged closer with petrol in November, with less than £300 between the average values for fleet & lease sourced stock. However, on average diesels have covered an additional 17,000 miles at remarketing and mileage adjusted values would see the gap increasing.

Values rose by over £700 for alternative fuelled cars sold last month, although data is difficult to interpret sensibly when volumes are so low. What can safely be ascertained is that there remains a steady demand for the trickle that appear.

Average values in the nearly new sector fell for the first time this year, falling from last month’s record value of £16,200 to £14,827. There really is little that can be read into this – demand for product and subsequent values in the nearly-new sector remain at exceptional levels and the change in value is more likely a reflection of any change in model mix at BCA, rather than a stalling in demand.

Gannon said: ‘Overall November has seen lots of demand from buyers with average prices rising from where they were in the same time last year. While the marketplace remains short of stock and professional buyers continue to compete strongly, both values and conversion rates at BCA will remain high.’