Was this article useful?
Click the thumbs up >
Jardine Motors Group has strengthened its presence with Bentley in the south east after opening a £1.2m dealership at Sevenoaks, Kent.

The group took on the Kent franchise three years ago, when it also acquired Bentley Essex in Colchester. Each outlet covers the whole county.

Ian Barrow, general manager of Bentley Kent, says two new Bentleys were sold as a direct result of the official opening and his team was following up a number of strong leads.

Barrow’s sales targets for this year are 60 new Bentleys and at least as many used Bentleys and other prestige cars. “Jardine has a group buyer and so we don’t have to rely only on trade-ins,” he says.

Bentley Kent was built on a site that used to combine Jaguar, Aston Martin, Subaru and Isuzu. The two PAG brands are now at nearby premises in Sevenoaks, while Jardine relinquished the two IM marques because they did not fit into its future plans. 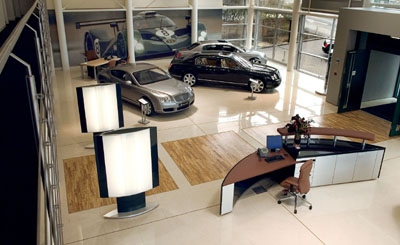