Was this article useful?
Click the thumbs up >
No, this isn’t Mercedes’ saloon riposte to the new Audi Allroad, but the foundations for an all-new crossover SUV to take on the BMW X3. The junior M-class, dubbed MLK, is due to hit the market in late 2008.

This prototype doesn’t give much away about the MLK’s looks, but sources say it will differ from the boxy, traditional SUV styling of the new M-class.

Expect a far swoopier roofline, and a wide chunky look. The funky details will take today’s edgy lamps, huge wheelarches and hyperactive sheet metal and turn them up a notch.

This cut and shut saloon is a platform mule, testing the offroader’s chassis and four-wheel drive system. It gives clues to the wheelbase (around 2800mm) and ride height – not massively jacked up over a Benz estate. That’s because the MLK is a soft-roader, with very much an on-road bias.

The 4x4 shares components with the new-generation C-class, which lands in showrooms next year. Expect independent suspension all round, with air springs and a self-levelling function. The four-wheel drive system will be based on the 4Matic C-class, not currently sold in the UK.

The MLK will measure around the same length as an X3, but the five-seat interior will be more practical. The rear seats fold independently, and can be removed. A big boot will swallow 500 litres of luggage.

Petrol power comes from the 231bhp 2.5-litre and the new direct injection CGI, the 292bhp 3.5-litre V6 unveiled at Geneva, will also figure.

The new MLK will be built at Mercedes’ plant in Bremen, Germany. 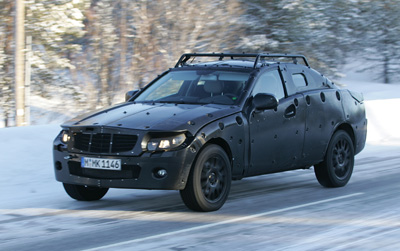 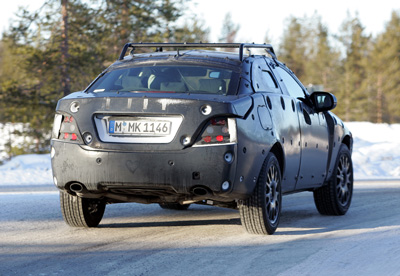 Chassis
This on-roader is spun off the new-generation C-class saloon, but gets four-wheel drive.