Was this article useful?
Click the thumbs up >
Chrysler will launch its new right-hand drive PT Cruiser Cabrio in the UK at the end of April as a spacious four-seat soft-top.

Steve Gray, marketing director of Chrysler Group in the UK, said: "The PT Cruiser Cabrio challenges convention and offers customers a different kind of convertible – it’s a genuine four-seater convertible and the engineers have put a lot of thought into making this one of the quietest soft-tops around.

"The PT Cruiser Cabrio has been designed as a soft-top from the outset, so drivers will find stability, ride and handling levels that are not typically found in this segment."

The B-pillar mounted sport bar is shaped to guide airflow over rear seat passengers and to generate the minimum turbulence and noise. With the low levels of noise generated when the roof is lowered, passengers can carry on conversations while driving. The added thickness of the three-layer, standard cloth top and ‘smart glass’ side windows also reduce road noise when the top is up.

The exterior of the new PT Cruiser Cabrio shares the new look of the hatchback that was launched at the end of 2005. Exterior enhancements include smoother front and rear fascias – including a new front grille with chrome accents and the Chrysler winged badge – and re-styled headlamps that feature a scallop along the bottom edge, plus fresh-look circular front fog lamps.

"Nearly all PT Cruiser customers tell us one of the key reasons they buy a PT is the stunning design, so our designers have made sure that we haven’t lost the car’s unique looks," said Gray.

The new exterior is only part of the story – while the all–new interior is quieter and boasts a host of improvements. The PT Cruiser Cabrio gives owners the versatility of nine different seating combinations and a large boot, which is 50 per cent larger than that of the VW Beetle.

In the UK, the PT Cruiser Cabrio is powered by a 2.4-litre, normally-aspirated engine generating 141bhp. The right-hand drive cabriolet, with five-speed manual or four-speed automatic transmission, will be available at the end of April 2006 priced from £16,650 for the manual and £17,470 for the auto. 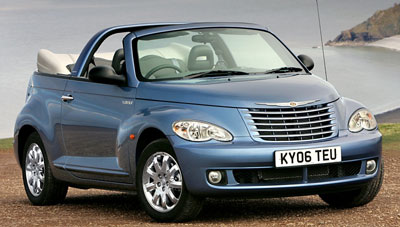