Was this article useful?
Click the thumbs up >
Japanese manufacturers have dominated a poll of the top 100 most reliable used cars over the past decade.

The list, compiled by independent mechanical breakdown insurer, Warranty Direct, found that every car in the top 10, and even 16 out of the top 20, were Japanese models. The Honda Accord was at number one.

Models were ranked according to the frequency of failure and based on a database of over 55,000 vehicles*. Last year, over 7.5 million Britons spent £25 billion buying a used car, nearly seven times the number of people who bought a new car privately. 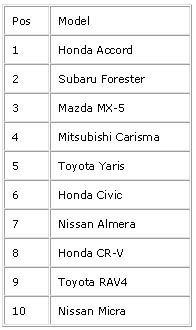 The highest placed non-Japanese model was the British built Jaguar X-type in 13th. The first German car appered was the Mercedes-Benz SLK at number 25.

"Obviously reliability is not the main reason why someone might choose one model over another, but it is still an important consideration for the majority," says Duncan McClure Fisher of Warranty Direct.