Was this article useful?
Click the thumbs up >
Kia’s new Carens compact MPV has made its world premiere at the Madrid Motor Show today and will go on sale across Europe later this summer.

The new Carens has been created specifically with European consumers in mind, according to Kia. There are two versions available - with seven-seater and five-seater cabins – both featuring ‘European-specific’ frontal styling with twin-chrome-bar grille, lower centre air-intake and front bumper with inset air-intakes or fog lamps.

Kia is offering European Carens customers a choice of one diesel engine and one petrol engine (both Euro IV compliant), with manual gearboxes or automatic transmissions.

Kia’s upgraded four-cylinder 2.0 CRDi diesel engine features a turbocharger (VGT), comes with a particle filter as standard. It generates 138bhp and has a six-speed manual gearbox. The 2.0-litre petrol engine, with continuously variable valve timing (CVVT), produces 142bhp and is mated to a five-speed manual.

Both Carens engines will be available with a four-speed automatic transmission (as an extra-cost option), fitted with Kia’s ‘sport mode’ system. 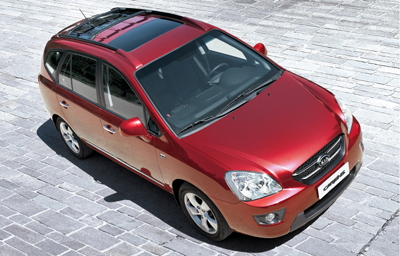