Renault Modus gets a refresh

Was this article useful?
Click the thumbs up >
The Renault’s Modus has been given a fresh look for the 2007 model year and is on sale now.

The carmaker describes the changes as ‘sublte’ on the back of its launch in September 2004.

The changes start with the exterior’s new clear ‘crystal’ indicator lenses for the front and rear lights and the wing mirror indicators, while on the inside each trim level gains new seat upholstery and higher quality interior materials for the dash and centre console.

The 2007 the trim line-up is Authentique, Expression, Dynamique, Privilège and Initiale, with the only model not continued into the new range being the 1.4 16V 98 Initiale.

A total of six engines are available, with three diesels – 68, 86 and 106hp, and three petrols – 75, 98 and 111bhp, all driven via five-speed manual gearboxes with the exception of the dCi 106 which is six-speed. The clutchless Quickshift5 gearbox will continue to be available with the dCi 86 engine alongside an automatic gearbox for the 1.6 VVT 111 petrol. 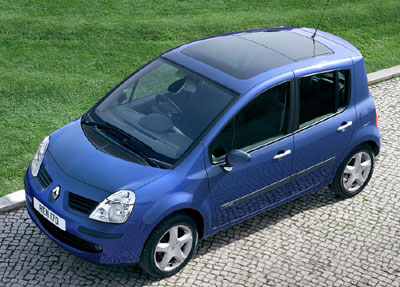