Was this article useful?
Click the thumbs up >
Nissan will release a new family of global cars over the next two years with sales of the first variant to start in China in 2006.

The Livina Geniss, the name of the Chinese variant, will be the first Nissan car ever to be released in China ahead of other global markets.

"We expect the Livina Geniss and the other variants to become significant contributors to Nissan’s growth in China and other key global markets," he said.

Like the other models in this new global family, the seven-seater Livina Geniss has been designed and engineered at the Nissan Technical Center in Atsugi, Japan and will be built on a Renault-Nissan Alliance common platform.

The Livina Geniss will be powered by a 1.8-litre gasoline engine with C-VTC (continuous valve timing control) for improved power and torque. The model will be manufactured at Dongfeng Motor’s Huadu plant in Guangdong Province, China. Nissan has a joint venture in China with Dongfeng.

The other variants, details of which have not been announced, will be produced at different facilities around the world. 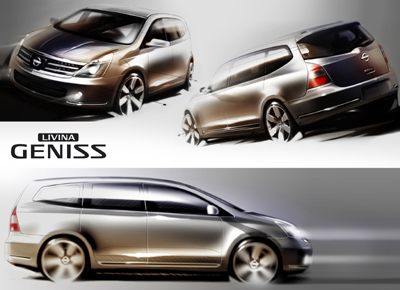