Was this article useful?
Click the thumbs up >
Nissan has reached a new milestone in June with the production of its 100 millionth vehicle.

"On behalf of Nissan, I would like to thank all our employees and customers around the world for their support without whom this important milestone would not have been possible," said Tadao Takahashi, executive vice president of manufacturing at Nissan. "We will continue to improve quality and productivity as well as shorten delivery times for customers."

The first car produced by Nissan under the Jidosha-Seizo name was a Datsun Type 12. The company name was changed to "Nissan Motor Co" the following year. 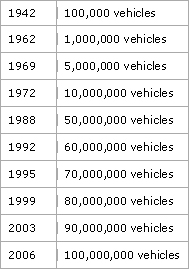