Was this article useful?
Click the thumbs up >
Safety tests have revealed potentially life-threatening faults in two new vehicles.

In the Nissan Note, one of the ISOFIX mounts for the child restraints broke in Euro NCAP’s side impact test. Nissan admitted the ISOFIX mount had not been welded correctly, but had been from an early production run and had now introduced more thorough testing. 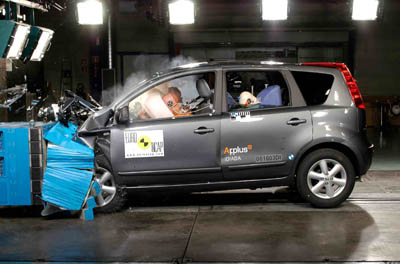 Euro NCAP also found that the Toyota RAV4’s airbags fired late during the frontal crash test. This was caused by the cable to a sensor becoming detached early in the impact.

Toyota has carried out improvements and a second frontal test, on a modified car, showed that the airbags deployed correctly, although the sensor cable was also damaged in that test. These modifications were introduced into production before Euro NCAP carried out its second test. However, Toyota has advised Euro NCAP that they do not intend to modify cars that have already been sold to the public.

Euro NCAP’s chairman, Claes Tingvall said: "Both of these cars have achieved a four-star rating. However, as new cars, we might have expected them to perform even better. It is worrying that Euro NCAP’s tests revealed potential problems in cars which were already in production and on sale to the public. Nissan are to be congratulated for modifying cars already sold. We believe that all customers should expect to get their cars modified when such weaknesses have been discovered."

Tingvall said: "Honda’s CR-V was the first off-roader to be awarded three stars for pedestrian protection. That was back in June 2002. I am pleased Toyota have finally turned their attention to the problem and that the RAV4 has performed well. It shows how much additional protection can be given to pedestrians by relatively simple design changes. I urge other manufacturers to follow this lead."

The Chevrolet Kalos was the worst performer of the four cars in the latest round of testing, with a three-star adult occupant protection rating.