Was this article useful?
Click the thumbs up >
The largest Lexus dealership in the UK is set to be officially opened on Wednesday.

Stephen Snow, Snows Motor Group’s operations director, said: "We opened the doors late last year and the response from customers has been tremendous.

"People have been impressed by the sheer scale of the operation which includes a mezzanine floor for additional space to display new cars and the largest Lexus pre-owned indoor car showroom in Europe."

Lexus Hedge End is a new addition to the Snows Motor Group, which already has 14 dealerships throughout Hampshire, Wiltshire and on the Isle of Wight, and the site was picked for its ideal location to serve the whole of Hampshire close to the M27.

The new Hedge End site also features a Kings Toyota showroom. Snow added: "Car buying has changed dramatically over the years and at Kings Toyota Hedge End there are no pushy sales staff, the facilities are state-of-the-art and we are here to ensure that buying a car is enjoyable, informative and as easy as possible." 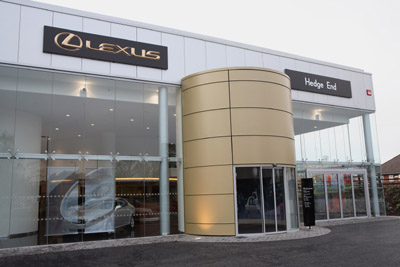