Was this article useful?
Click the thumbs up >
Windrush Volkswagen Slough is mid-way through a £500,000 major revamp to improve its workshop, showroom and used car facilities.

The Farnham Road site will remain open for business while Windrush demolish a petrol forecourt and industrial building which will then be absorbed into the dealership.

The new workshop will features a four-wheel alignment area and five additional car ramps, including two specifically for luxury models. The larger new car showroom will have space to display an extra four or five cars, while a bigger line-up of pre-owned Volkswagens (55 instead of 38) will be displayed outside.

A new feature entrance will be created on the Farnham Road side, where the boundary will be landscaped for the first time.

Tim Attwood, dealer principal at Windrush VW Slough, said: “A bit of chaos is inevitable when such major changes are under way, but we know our customers will be delighted with the new facilities when they are completed around Christmas time.”

Windrush Volkswagen is simultaneously effecting major improvements to its Maidenhead outlet, where the aftersales operations have been separated from the sales activities and housed in a new facility.

Collectively, the company is spending £1million on its two Berkshire dealerships. The group will also be recruiting to help with the expansion of its sites. 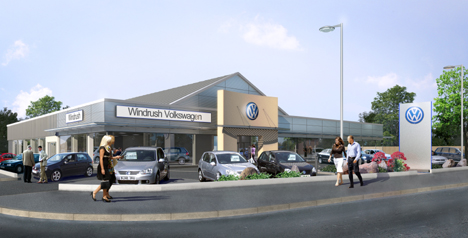 An artist’s impression of the completed site.