Was this article useful?
Click the thumbs up >
Rolls-Royce has opened its first showroom in Ukraine.

The Kiev showroom is owned by AWT Bavaria and was officially opened on December 7 by Graeme Grieve, the sales and marketing director of Rolls-Royce Motor Cars.

The Phantom Drophead Coupe was unveiled at the opening which made its Ukranian debut.

Dr Olexander Tymofyeyev, AWT Bavaria general manager, said: "We have invested in new premises for the Rolls-Royce business so that we are fully prepared for further new models and continuous growth over the coming years.

"We have seen strong customer interest in the Phantom Drophead Coupé already and we look forward to the start of deliveries very soon."

Grieve said the new showroom reflected the growing importance of the eastern European region to the continued development of Rolls-Royce brand. Rolls-Royce Motor Cars has 19 showrooms throughout continental Europe. 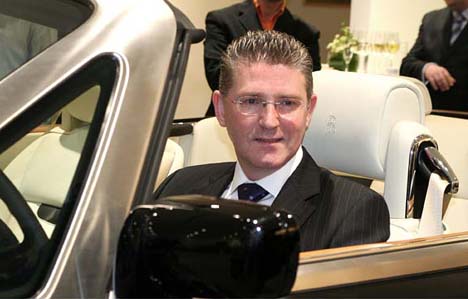 Graeme Grieve at the new Rolls-Royce dealership in Kiev.