Was this article useful?
Click the thumbs up >
Peugeot’s next big arrival is the replacement for the 307 small family hatchback. Yes, there’s the new 4007 off-roader and 207 GTI, SW and CC derivatives coming first, but the new 308 is the company’s next major launch.

And nestling under the plastic cladding of this prototype’s disguise is our first glimpse of this crunch new arrival.

Expect to see the 308 in showrooms in 2008. Unlike today’s high-roofed 307, which represented a big change from the conventional 306 hatchback, the new model will serve up more of the same; the 308’s tall stance and raised roofline are clear even under the disguise.

The upright architecture, heavily slanted windscreen and MPV-style quarterlights suggest the cabin will be light, airy, and spacious for bodies and bags. If the hatchback pictured here isn’t spacious enough, you can always wait for the SW estate version; a folding tin-top 308 CC model is also scheduled for production later in 2008 or 2009.

As with the looks, so with the engineering; don’t expect anything radical under the bonnet. There’ll be the PSA Peugeot-Citroën shared medium car platform from the C4, so the front wheels will be driven by a wide choice of petrol and diesel engines, stretching from 1.4 to 2.0 litres.

Peugeot will be hoping to repeat the success of the 307, which has hit nearly 3m global sales since launch in 2001; it even surprised many by winning the 2002 European Car of the Year. 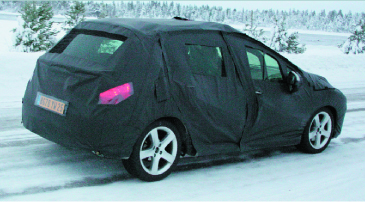 ENGINES
Familiar petrol and diesel engines from 1.4 to 2.0 litres