Was this article useful?
Click the thumbs up >
The 25 millionth Golf has rolled off the Volkswagen production line in Wolfsburg.

The very first example of the production Golf was assembled in 1974 and within three years volume totalled a million vehicles.

Over 33 years and four generations later a Golf 1.4 TSI fitted with DSG transmission and finished in tornado red, became the 25 millionth example.

Speaking as the vehicle came off the line, plant manager, Dietmar Korzekwa said: “It is an outstanding achievement of which we can all be proud. Over 15 million Golf models have been built in Wolfsburg alone. My thanks go to all employees for their commitment – day in, day out – over many years. Together, we will continue the Golf success story.’

The Wolfsburg plant is the largest vehicle factory in the world under one roof. The factory grounds cover an area of 6.057 square kilometres – large enough to contain the Principality of Monaco. It has its own hospitals, a train station and its own road network totalling 75 kilometres.

The two power stations at the plant also supply energy and heat to the town of Wolfsburg.

Last year over 716,000 examples of the Golf were sold worldwide. This year also marks the 30th anniversary of the arrival of the Golf GTI in the UK. 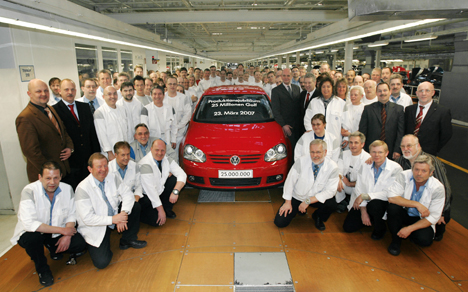