Spyshot: The Sky’s the limit for Nissan

Was this article useful?
Click the thumbs up >
The long-awaited successor to Nissan’s Skyline GT-R supercoupé is now well within sight after a five-year hiatus.

The GT-R (no longer called Skyline) will be revealed in full this autumn, but our spies have captured the car virtually undisguised six months early.

Since the last Skyline ceased production in 2002, the only hint of a replacement was the GT-R Proto concept shown two years ago – and these thinly disguised spy shots prove that the GT-R has changed little from the concept, but a lot from the previous Skyline.

It has a much edgier appearance than its predecessor, with razor-sharp lines, plenty of air vents and a large rear wing.

Skylines have always been powerful cars and the GT-R is no exception. Nissan is using a 4.0-litre version of its V6 engine currently found under the bonnet of the 350Z, bolstered with the addition of a pair of turbochargers to produce some 500bhp. Keeping all that power in check is a sophisticated all-wheel-drive system that can direct drive to any individual wheel. 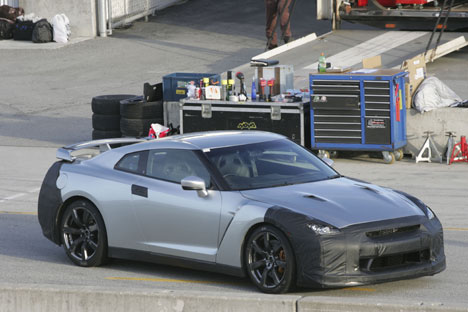 The GT-R has enough firepower to make it easily the fastest Nissan production car in history. It’s expected to hit 60mph in less than five seconds, and keep going all the way to 185mph.

It’s still a long way off UK shores, though. The GT-R will be shown at the Tokyo Motor Show in October, but we’ll have to wait a further year before it lands in UK showrooms, with a price tag of around £65,000.