Was this article useful?
Click the thumbs up >
The AM Index gives an overview of three-year/30,000-mile used car values across every sector. Each month AM, in conjunction with pricing data provider CAP, puts the spotlight on one sector – this month it’s upper medium cars.

This movement is typical of the market at this time of year, as showroom traffic slows down. It precedes the expected upturn in March, which will be brought about by the introduction of a new plate.

Consistent under performance by Saab 9-5 petrol and diesel, along with poor sales within the BMW 5-series diesel and Mercedes E-class petrol and diesel ranges, have led to a larger than average reduction of 2.8% in large executive prices this month.

The market as a whole is slightly weaker than at the same point last year, with 36-month/30,000-mile prices down 1.5% year-on-year. As with last month, the culprits are large executive and 4x4.

The supermini sector bucks the trend of the market as a whole in terms of year-on-year movements, with an uplift of 6.3% this month. The strong performance of Fiat Punto petrol and diesel models is primarily responsible for this.

The upper medium sector sees a negative month-on-month movement of 1% in February, but the slide is not as bad as the ‘overall’ average.

#AM_ART_SPLIT# This is mainly due to positive movements within the Vauxhall Vectra petrol and diesel ranges (up 1% and 1.4% respectively), as well as Mazda6 petrol (0.8%) and diesel (1.6%). Other vehicles to influence this trend are Ford Mondeo petrol saloon (0.6%) and the Renault Laguna petrol range. Upper medium petrol derivatives fare slightly better than their diesel equivalents in the month-on-month change stakes.

The average price of vehicles in this basket has dropped by 0.8% between January and February, with diesel falling by 1.2%.

Between February 2006 and February 2007, the sector has declined by 2%, with an equal drop being shared between petrol and diesel.

Poor performance on 2004 plates and older in the third quarter of 2006 led to 6% drops in Ford Mondeo petrol values in August of last year. The Mondeo diesel range performed more favourably, falling by 3% in comparison. These reductions contributed to the general decline in upper medium used car prices.

Renault Laguna diesels also endured poor sales returns in quarter three and this caused the range to fall by 5.2% over the year.

Interestingly, these drops were partially offset by the over-achievement of Peugeot 406 diesel, the average price of which rose by 9.7% year-on-year.

Diesel premium over petrol in this sector remains steady at around 19%. 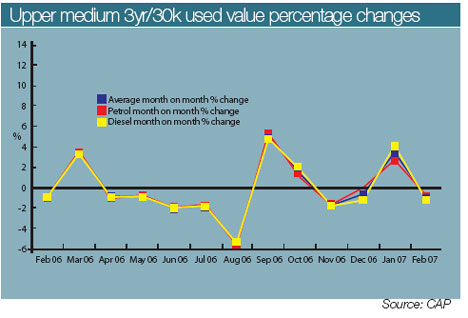 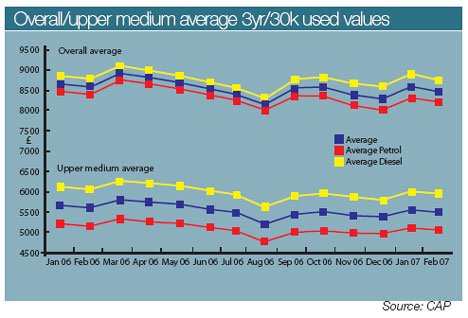 AM Poll
Will new car supply be restored to normal levels in 2022? Please leave a comment
Vote
View all
2615