Was this article useful?
Click the thumbs up >
Trying to unearth the profitability of carmaker-owned retail groups is nigh on impossible. For some, even disclosing turnover is a step too far.

Ford Retail has broken from the pack, however – at least, it has since a remarkable turnaround in performance. In 2005, its first full year of trading, the group lost £5m. Last year it made almost £3m profit.

Chris Hayden, Ford Retail chief executive, says: “It was a tough first year. Lots of people voted with their feet about working for a manufacturer-owned group and some good people left.

Removing cost was the key to the £8m upturn. Ford Retail, which accounts for 16% of Ford’s new vehicle sales, was created from several companies – Dagenham Motors in the south east, Polar Ford in Yorkshire and the north west, Heartlands Ford in Birmingham and Brunel Ford in Bristol/south west – acquired over a 15-month period.

It inherited five dealer management systems, now trimmed to one – Kerridge Autoline – while a major redundancy programme saw 3,000 employees cut by 220. Ford Retail also set up an HR operation run by people from outside automotive.

Almost £5m of cost was stripped out. Added to this were increased profits from aftersales, new vehicle sales up 6.7% and higher transaction prices and unit profitability.

Hayden insists the results are “pure accounting” with no rent support or preferential treatment from Ford. “If we do what we say we will and deliver volume, profit, process and CSI, then Ford leaves us to get on with it. But we have to earn that right every day. We have proven to be an asset.”

Ford Retail outstripped the franchise performance last year, averaging 0.7% return on sales against the 0.4% network average – and that’s with 20 dealerships within the high-cost M25.

Hayden believes 1.2% is a realistic target.

His advantage is the fact that all 55 sites have Ford franchises (three also have Mazda and three Iveco). This allows benchmark performance targets on a like-for-like basis.

Hayden confesses he was “highly embarrassed” by quality checks carried out by Ford and the RAC during mystery shopping of marked cars 18 months ago. “We were cutting corners,” he says. “It was a wake-up call.”

A new focus has helped Ford Retail improve aftersales CSI by 25 percentage points. It has been aided by the in-house call centre at Barnsley which, according to Hayden, has boosted service hours sold.

“The call centre handles all internal service calls and is doing more outbound calls as well. We have more information about customers.”

A second centre, in London, will open by summer.

So what’s the next big move? Hayden, who is also responsible for nine sites in Europe, believes more Ford dealerships in the UK is unlikely, but expanding with Mazda and Iveco is a possibility.

“For the right opportunities and the right returns I would consider some standalone Mazda or Iveco dealerships,” he says.

And what of the Ford Premier Automotive Group brands? “We maintain a healthy dialogue with them, but you have to earn those franchises. No doors have been closed.” 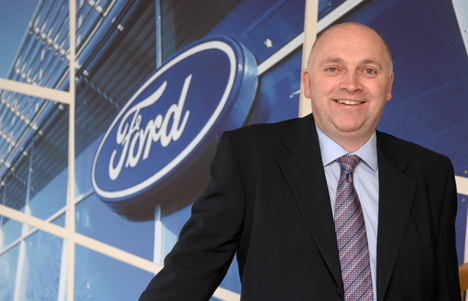 “We have an audience with Ford”

Ford, when setting up its retail group, claimed it would help the company to understand issues facing dealers. Project 50 suggests this is working.

“We probably created the original ideas regarding the processes that don’t work for dealers,” Chris Hayden says. “We have an audience with Ford and it’s my job to do to do more of this.”

Hayden influenced the Nimbus parts distribution strategy, helping to develop an improved version, 3D, which is now being rolled out to the network.

Twelve or so parts distribution points will be set up – Ford Retail will have five – that are responsible for the onward delivery of parts to the network 24 hours a day.

Parts stock will be centralized with dealers maintaining cupboard stock only. Ford believes it will free space at the dealership for more workshop bays.

Hayden also had a hand in IDS, a new handheld diagnostics workshop system, which gives technicians more real time information and shares problems and solutions across the network immediately.

“Ford can use us as a sounding board. We can help stop something being developed if it’s not right for the retail network because we are asked our opinion early on,” Hayden adds.