Was this article useful?
Click the thumbs up >
The manufacturer-car dealer relationship is warming up despite tougher trading conditions, according to the latest Dealer Attitude Survey from the National Franchised Dealers Association (NFDA), a part of the RMIF.

The NFDA Winter 2006/2007 Dealer Attitude Survey, published this month, shows that the relationship between dealers and manufacturers is improving. Some 44% of dealer networks say the value of their franchise has risen, 81% report satisfaction with vehicle supply, and 50% say their confidence has increased since the last survey.

Sue Robinson, NFDA director, says: ‘It is encouraging that the results of this survey seem to suggest that the manufacturer-car dealer relationship may be benefiting from a little more balance.

“At a time when the new car market is at its most competitive, every sale counts and it will be those manufacturers that inspire the most confidence in their networks that will perform best in this difficult climate.”

Overall, dealers believe the value of their franchises has risen, despite a drop in sales, and the detrimental effects of high interest rates.

Franchises that fared particularly poorly for marketing support and stance are Volvo, Subaru, Kia, Peugeot and Renault, while Alfa Romeo, Audi, Jaguar, Mini, Proton and Volkswagen were all rated highly.

Declining profitability is a worry for many dealers. Those with BMW, Land Rover, Suzuki and Chrysler Jeep franchises reported the biggest loss of confidence in the earning potential of their business during the last 12 months. Yet it’s a far more upbeat story for Alfa Romeo, Audi, Jaguar, Honda, Vauxhall and Volkswagen, according to the dealers surveyed. And those same dealers are reasonably confident in their ability to turn a profit in the coming year.

Retained margins on new car sales, including bonus and rebates, have fallen for more than 80% of the networks and half suggest that this decline is steeper compared to six months ago. 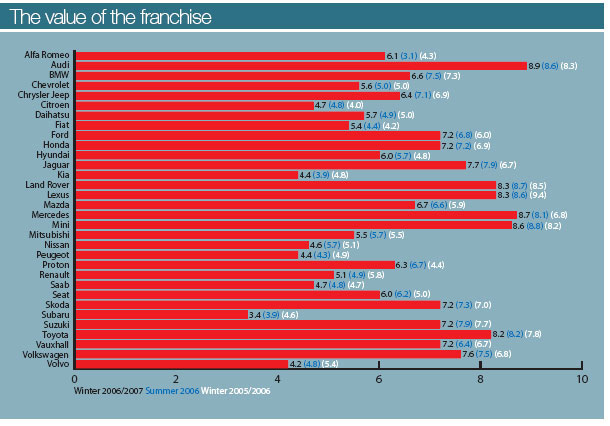 Margins for Lexus, Land Rover, Citroën, Mitsubishi, Saab and Toyota franchises all have taken a turn for the worse, according to their dealers, whereas the survey suggests that Alfa Romeo and Volkswagen retailers are holding on to more margin than before.

The supply of vehicles matching to requirements has been a problem for some. Dealers representing BMW, Chrysler Jeep, Land Rover, Saab and Suzuki responded far less favourably than six months earlier in the previous NFDA study. Yet Alfa Romeo’s satisfaction score has jumped significantly.