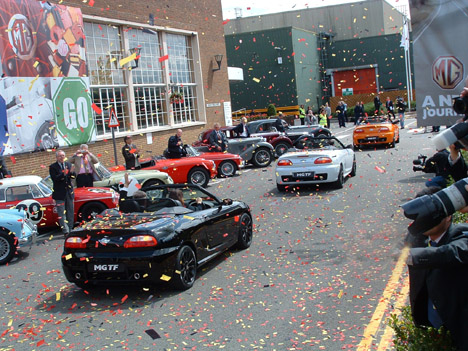 Unite, the UK’s largest trade union, welcomed Nanjing’s decision to reopen the plant. Approximately 1,200 jobs will be created when production starts later this year, which Unite hopes will give ex-MG Rover employees a chance to return to the factory.

Eric McDonald, regional industrial organiser for Unite (T&G section) said: "Longbridge has a long and proud history within the automotive industry and Nanjing’s ownership will be another important chapter, so we wish it every success.

"The restarting of car production will be welcome but we continue to press Nanjing to honour their stated objective of 1,200 jobs. There are still many ex-MG Rover workers who are unemployed and hoping to return to Longbridge. We look forward to a positive relationship with Nanjing."

"We realised from the outset of this project that retaining a manufacturing link with the UK is of fundamental importance,” says Yu Jian Wei, CEO of NAC.

"Longbridge will play a leading role in our European operation and the plant is now in a position to commence TF production for the UK market. This is a very exciting time for MG and it’s an important boost to the economy of the Midlands manufacturing region," he added.

The opening of the factory comes after Nanjing announced plans to appoint the UK’s first MG dealers this month. The company is remaining tight-lipped about their identities.

However Stephen Cox, NAC MG’s UK sales/ franchising manager, expects five dealers to have signed franchise contracts by the end of this week.

NAC wants a contracted dealer network in place by September, ready for an autumn launch of its re-born MGTF roadster. Cox wouldn’t reveal how many sales points he wants, but says 96 franchise information packs have been sent out.