Spy shot: Ford’s biggest hitter gets a makeover for ’08

Was this article useful?
Click the thumbs up >
We don’t normally cover American cars in Spy Shot, but the F-Series is the best-selling model in the US, and therefore of critical importance.

Especially to Ford, a company whose global accounts are covered in red ink.

European motorists may think pick-ups are good only for clearing out the garden shed and dodging company car tax, but in America – still the world’s biggest car market – big is beautiful. And they don’t come much bigger than the Ford F-150.

This new model won’t be shown until next year’s Detroit Motor Show, but our spies caught a trio of prototypes testing near the Blue Oval’s Dearborn HQ. A fitting debut for a car that’s predominantly sold in its domestic market, with no plans for European sales.

Responding to the rising popularity of Japanese pick-ups, such as the successful Toyota Tundra, Ford hopes to safeguard its market lead in the full-size truck segment. The exterior retains the tough styling that’s set apart generations of F-Series, while the inside gains more creature comforts.

As before, Ford will offer a full range of bodystyles, including short cab, extended cab and four-door double-cab. A wide choice for what is without doubt one of Ford’s most important new models for years. 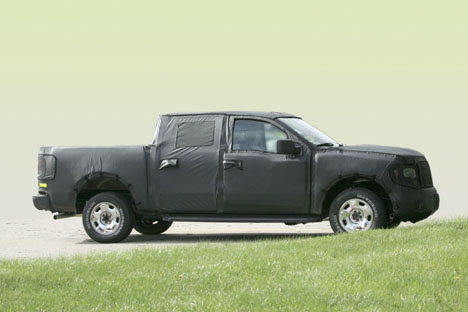