Was this article useful?
Click the thumbs up >
Honda’s Civic Hybrid and Skoda’s new Fabia have received their ratings from the latest Euro NCAP safety tests.

Adrian Hobbs, Euro NCAP’s Secretary-General, said: “Consumers may be asking themselves whether high safety scores and a hybrid powertrain can go hand in hand.

“Both Honda and Toyota have shown that they are rising to the challenge in their efforts to meet concerns about safety and global warming. It is now up to other manufacturers to follow in their footsteps.”

The Civic Hybrid is the second alternative fuel car that Euro NCAP has tested. Euro NCAP tested the Toyota Prius back in 2004, which received a five star score in adult occupant protection.

Today’s result is hotly anticipated throughout Europe where fleet buyers and consumers are increasingly seeking out cars with lower CO2 emissions and higher safety scores, to benefit from the growing use of tax incentives and to avoid road charging. 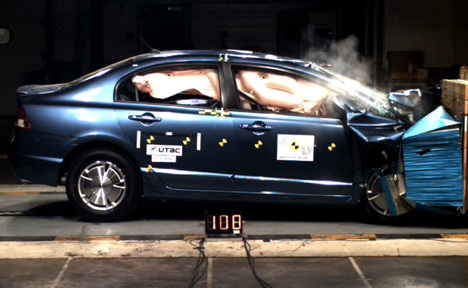 Front impact
The passenger compartment remained stable during the impact. However, there was insufficient pressure in the driver's airbag to prevent the dummy's head from making contact with the steering wheel. Structures in the dashboard presented a risk of injury.

Child-protection
The presence of ISOFIX anchorages in the rear outboard seats was not clearly marked.

Pedestrian protection
The Civic Hybrid scored maximum points for the protection offered to pedestrians' legs by the bumper and the front edge of the bonnet. 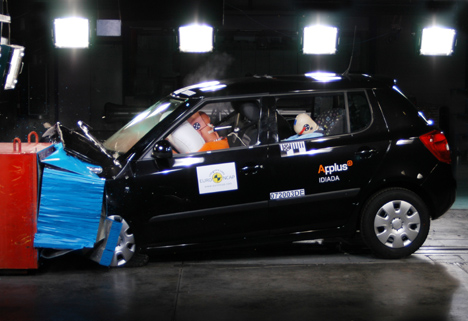 Front impact
The passenger compartment remained stable during the impact but structures in the dashboard presented a risk of injury to the knees and femurs of the driver and passenger.

Side impact
Based on dummy results alone, the Fabia would have scored maximum points in the side impact and pole tests. Howewer, in the side test, the rear door moved from the primary latch to the secondary latch position and the car lost one point available for that.

Child-protection
The Fabia scored maximum points for its protection of the 18 month dummy in the frontal and side impact tests. In the side impact, the 3 year old's restraint rotated so that the dummy's head was not fully contained within the child seat, making it vulnerable.

Pedestrian protection
The bumper scored maximum points for the protection it offered to pedestrians' legs. However, the front edge of the bonnet scored no points.