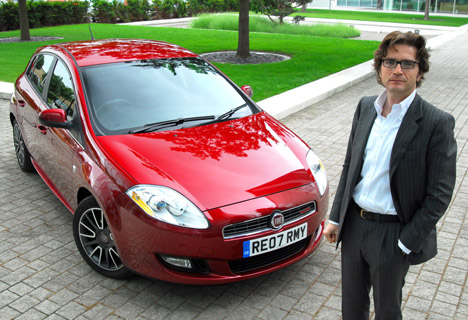 Giulio Salomone with the new Bravo

Three years ago, Fiat Group was the basket case of Europe. Car sales were falling, losses were rising and people were being laid off. Despite promises of a turnaround, breakeven looked a pipe dream.

The group, with profitable interests in agricultural and construction equipment, commercial vehicles and components/production systems, appeared poised to sell its ailing automotive division.

Despite a cash injection of just over £1bn from stakeholder General Motors, which freed the American car giant from the ‘put’ option to buy the division outright, analysts were predicting the end of Fiat Auto. It got that bad.

In the UK, some dealers deserted the brand. Fiat had few options about appointing replacements which, by its own admission, led to some desperate decisions. Sales plummeted, profits vanished and customer satisfaction levels were floored.

Yet this month, Fiat was seriously considering making a play for Jaguar and Land Rover. It was only warned off after city analysts said its credit rating could be downgraded.

That’s a credit rating that one of the top ratings agencies, Fitch, raised this month to an investment grade (BBB-) for the first time in four years on the back of a profits revival at Fiat Group and its Auto subsidiary.

#AM_ART_SPLIT# In 2006, Fiat Auto made a trading profit for the first year since 2000. And in the first quarter of this year, its revenues have risen 11% to £4.6bn, the sixth consecutive quarterly rise.

It’s a remarkable turnaround. So how did Fiat succeed where the likes of MG Rover failed? Clearly the deep pockets of a large parent company helped. So did Government support for a business that is so important to the Italian people. But that only ensures short-term survival.

Attitudes have transformed, with senior management more willing to court the views of colleagues and those people who really know what is going on in the marketplace – the retailers. And that led to the crucial factor behind Fiat’s turnaround: product development.

The company has returned to its small car heritage, producing high quality models that meet customers’ needs. It has enabled the brand to be repositioned as beautiful, affordable and fun to drive.

Both the Panda and Grande Punto have been strong sellers across Europe.

The new Bravo is following up that success, while genuine excitement surrounds the 500. Due on sale in Italy from next week, and in UK showrooms from the start of next year, the 500 has whipped up a frenzy and is set to be a massive seller.

#AM_ART_SPLIT# Indeed, UK dealers are calling for Fiat to bring in left-hand drive models to satisfy demand ahead of the January 2008 launch. The company has promised to put their case to the Turin headquarters.

Fiat Auto UK’s turnaround has been fundamental to the company’s revival. Last year it was the fastest growing main brand, with sales up 64.2% at 58,831 units.

Now it has “three or four choices” for each open point and a waiting list of dealers keen to take on representation. Dealers in the network, in contrast to Fiat’s appalling recent rack record in the NFDA and Sewells dealer attitude surveys, are upbeat.

This is reflected in their view of Fiat Auto UK managing director Giulio Salomone who is described as “a breath of fresh air” by one retail chief executive.

In two months’ time, Salomone becomes the longest serving Fiat Auto UK boss, at 28 months, since Jim Blades, who left in 2002. In between, two men have held office – Massimo Toso and Jose Antonio Garvia – neither with any real degree of success. Dealers have been concerned at the apparent revolving door and are keen to press Salomone on his long term plans.

Knowing Fiat Auto’s liking for regularly moving its executives around, Salomone understandably skirts the question. “We are in the middle of the journey and I have a lot still to do,” is as far as he’ll go, adding: “I am happy with the progress.”

Salomone has been with Fiat for 20 years. His previous position was senior vice president financial services in Turin, which kept him at the heart of the company during its most troubled times.

Before that he was country manager at Fiat Portugal, working with Miguel Fonseca, now Toyota GB managing director. He counts him as a good friend, although busy work schedules have so far prevented the two from meeting up in the UK.

#AM_ART_SPLIT# Last year’s sales growth helped many UK Fiat dealers return to profit for the first time in years. Average return on sales rose to 0.5% and is up again in the first quarter of this year at 1.2%. Fiat expects the network to end the year on around 1%, which will equate to pre-tax profits averaging £100,000.

One-fifth of the network is loss-making, compared to 40% last year, but the situation will improve on the back of new Bravo.

Sales will hold steady this year with Fiat budgeting a slight rise to 60,000 units. It’s on target, with a rise of 5.86% after the first five months.

The network will increase from 160 to 190 outlets. But that doesn’t mean adding another 30 sites; it means appointing around 50 dealers, as Fiat believes only 140 of the current 160 retailers will stay with the franchise.

#AM_ART_SPLIT# One of the new retailers will be a company-owned flagship store near Portman Square in central London. The deal on the land is close to completion and the dealership is scheduled to open by the end of the year.

Fiat is in talks with retailers about accelerating the internal corporate identity programme, launched a year ago. So far, 40% of the network has adopted the changes, which require Ikea furniture and a new layout.

By the end of the year, Fiat wants 90% to have completed.

In addition, all retailers will have gone through the exterior ‘Blue’ corporate identity programme introduced three years ago – currently 70% have made the investment.

Salomone is confident profits will continue to rise despite the cost of investment. “It’s important to have dealers that make money,” he says. “If they make money, they will invest.”

Following repeated poor showings in the JD Power customer surveys, Fiat has begun talks with the organisation to find out in more detail its shortcomings. They fall into three areas.