Cost of running a car falls

Was this article useful?
Click the thumbs up >
A fall in the day-to-day expenses of running a car has slowed the overall total cost of motoring in the UK.

RAC Direct Insurance’s annual Cost of Motoring Index reveals that average daily running costs for an average family car have fallen close to the levels of 2005, seeing the total cost of motoring rise by only 3% year-on-year, compared with an 11% increase the previous year.

The average family car now costs £5,627 a year to keep on the road, an increase of £162.70 year-on-year. The slowing rise in the cost of motoring is at odds with Government and environmental agendas to encourage greater use of public transport. Added to this, public transport fares are rising year-on-year, often above the rate of inflation, a trend that looks set to continue, with further increases predicted this year and beyond.

The Cost of Motoring Index is an in-depth piece of research that tracks the costs associated with owning and running 17 popular models of car. It pointed to two factors that had helped to reduce the day-to-day running of a car in Britain; a reduction in the cost of car maintenance and a reduction in money spent on fuel.

Car maintenance costs are down by 8% to £273 a year compared with £298 in 2006. The price of fuel has fluctuated throughout the last year with petrol prices today 0.24% lower and diesel prices 1.22% lower per litre than at the pump a year ago. This combined with today’s more fuel-efficient cars has led to a decrease of nearly 10% in the real cost of fuel used per year.

Depreciation is the largest cost factor, as it has been in previous indexes, with the average car now losing £2,357 a year, nearly a 6% increase on 2006. The average motorist is now losing £45.33 a week on the value of their car and the residual value of cars in the index after three years has dropped from 47% to 42%.

Adding to this, the cost of borrowing is at a six year high, experiencing a 17% increase since this time last year (£169 more than in 2006).

The average cost of tax decreased by a minimal amount, but owners of 4x4 vehicles have been hit the hardest with a massive increase of nearly 60% in car tax. However, in line with the Government’s support for greener motoring, environmentally aware car owners enjoyed a tax decrease of 50%.

#AM_ART_SPLIT# A spokesperson for RAC said: “It’s good news that the day to day costs of motoring are in decline, which will help to relieve some of the burden of running a car. However, with both bus and train fares continuing to rise and with growing congestion making journey times unreliable on our roads, the fall in car running costs is unlikely to help Government in its attempts to persuade motorists to make greater use of public transport.

“If motorists continue to be wedded to their cars then financial incentives are going to be needed to encourage the uptake of greener vehicles.”

According to the Index, the full costs for running a car are: 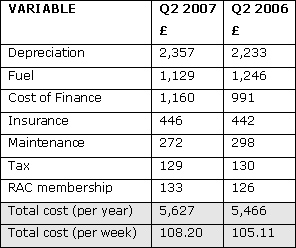