Hyundai has enjoyed considerable success with its coupé, which enjoys surprisingly little competition in the bargain sports car market. Ford and Vauxhall abandoned the coupé sector long ago and other mass-market two-doors such as the Peugeot 407 Coupé have crept up in price, leaving the Korean contender to reap in sales at quite a lick.

Hyundai sells more coupés in the UK than BMW does 3 Series two-doors. So you can see why the designers won’t go messing with a successful formula too much for next year’s new arrival.

Our spies caught this disguised prototype testing in America. The US market model is called the Tiburon (meaning shark), but it will again form the basis for the European model.

The big news is the engineering underneath the sleek two-door bodyshell. The next coupé is going to switch to rear-wheel drive, based on the underpinnings from Hyundai’s forthcoming American executive car, the Genesis. Without all the engine’s torque troubling the steering axle, it should improve the coupé’s dynamics considerably.

It’s too early to tell which engines Hyundai will offer; the move to a rear-drive platform is likely to spell the end of the smaller petrol engine. 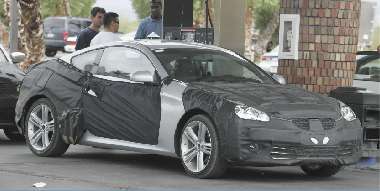 Price: No surprises in the showroom; expect prices from just under £16,000