Was this article useful?
Click the thumbs up >
Although Kia has no current plan to introduce the new Borrego SUV, unveiled here, into the UK, that decision may be reviewed next year.

Borrego houses the company's first-ever V8 engine, making it the most powerful Kia vehicle to date, and is bigger than the Sorento which is the largest of its UK’s off-roaders.

Kia UK managing director Paul Philpott has said that the lack of a diesel engine made the 4x4 a non-starter for the British market.

Insiders at the Detroit show, however, revealed that the company could equip the Borrego with Kia’s 2.2-litre turbo diesel or normally aspirated 3-litre diesel engines at some point.

That would make it more attractive to the UK market although Kia said it would have to look at whether it actually needed a larger SUV. It could serve a purpose as a flagship model, however.

The Borrego will go on sale in other markets around the world under the Mohave name.

The Borrego was launched at Detroit by Kia’s North American president, British-born Len Hunt and it goes on sale in the USA this summer.

Hunt confirmed that diesel engines will be made available “within the first generation of the vehicle”.

In American terms Borrego falls into the "mid-size" segment but in the UK would be regarded as a "full-size" SUV and is larger than the Sorento. 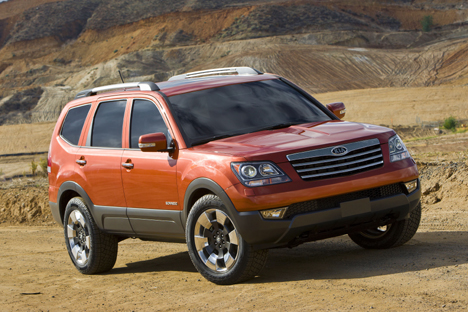