Was this article useful?
Click the thumbs up >
Nissan is to create 800 jobs at its Sunderland factory in response to demand for its Qashqai model.

A third production shift is to be added at the plant, with hundreds of temporary workers offered permanent jobs.

Trevor Mann, senior vice president of Nissan Europe, said: "Currently, on two shifts, we can produce 200,000 Qashqais per year. However, the car is proving so popular we now need to significantly increase our volume."

Half of the new jobs will be full-time and the other 400 will be temporary, and all the new workers will be recruited by the end of the year.

Since its European launch last March, sales of the Qashqai have reached 130,000, leading to a 20% increase in production at the Sunderland plant.

The factory, which currently employs 4,200 workers, built a record 353,000 cars last year of its Qashqai, Note and two Micra models.

Mann said: "This is a tremendously positive move by Nissan and represents a great vote of confidence both in the success of Qashqai and in the Sunderland workforce, who achieved a record production year in 2007.

"Today, this level of recruitment in the Western European car manufacturing sector is rare, and reflects the ongoing commitment Nissan has in its UK operation."

As well as the 800 new jobs at Nissan, it is estimated that 400 posts will be created throughout Nissan's local supply base.

Roger Maddison, national officer for Unite, the UK's biggest trade union, said: "This vote of confidence in the Nissan workforce and the UK car business is a smack in the face to the Peugeot's of this world who claim the UK is not the place to invest and proves once again that UK manufacturing is alive and kicking." 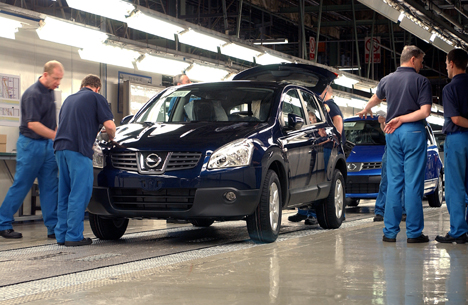