Volvo has revealed the first pictures of its S60 concept which will be unveiled at the Detroit Motor Show in January.

The concept gives an indication of what the new S60 will look like when it's launched in 2010.

Volvo has said forthcoming models will be inspired more by racetrack design cues than ever before. The concept also shares a resemblance to the new Ford Mondeo.

The S60 concept also includes new safety technology that can detect a pedestrian who steps out into the path of the car and then engages the car's full braking power automatically if the driver does not respond to the danger. 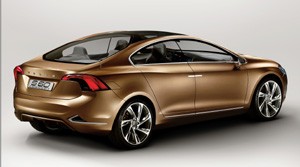 The technology, Collision Warning with Full Auto Brake and pedestrian detection, will be included on the production version of the S60 in 2010.

Thomas Broberg, safety expert at Volvo Cars, said: “Up until now, we have focused on helping the driver avoid collisions with other vehicles.

“Now we are taking a giant step forward with a system that also boosts safety for unprotected road-users.

"New sensor technology also makes it possible to advance from 50% to full automatic braking power. To our knowledge, none of our competitors has made such progress in this area.”