Long journey is over as Infiniti goes live in Europe 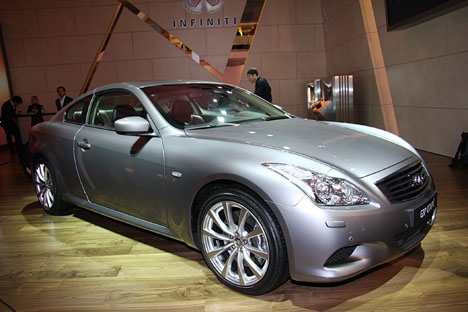 Twenty years after its US launch, Infiniti has gone live in Europe. It's been a long journey for the brand, which was launched in America in 1988 as Nissan's answer to Toyota's Lexus.

But while Lexus crossed the Atlantic within a couple of years of its launch, infiniti was felt to be “too American” to succeed in Europe, and it was not until the Renault-Nissan alliance took firm root that serious consideration was given to building cars for European tastes.

Fittingly, it was Renault-Nissan president Carlos Ghosn who took to the stage to reveal Infiniti's launch model line-up at a special event at the end of the Geneva show's first press day.

“After a 20-year journey, we believe Infiniti is ready for Europe,” he said. Ghosn defines the target buyers as “customers who are confident in their own taste and who don't follow the crowd – a self-selecting minority”.

He said i was vital that Infiniti had to find its own niche. “If all we had to offer was another me-too version of luxury, we'd have no chance.” The basic philosophy was “modern Japanese luxury – seeking beauty in simplicity”, which positions the brand closer to the “cooler” European brands such as Audi and Saab.

Infiniti will go live with a four-model, all rear-drive range, with most of the volume coming from the G37 saloon and coupe, plus the EX37 coupe-SUV crossover. All these three will initially be powered by the same 3.7-litre V6 petrol engine, with diesels and hybrids to follow in 2010.

The fourth model was unveiled at the event – the flagship FX50 is a larger SUV powered by a 5.0-litre, 32v V8 engine developing 390bhp and 500nM of torque.

Ghosn is taking a cautious approach: “We will start small and build loyalty,” he said. Initially dealers will only be sited in major European cities, and at launch there will be only 25 centres in 15 cities, and even by 2010 there will be fewer than 80 Infiniti dealers in Europe.

Ghosn said the Infiniti dealership experience “would have more in common with a luxury boutique hotel than with a car dealership”. UK sales will start in the second quarter of 2009, with a small number of retail centres in major cities.