Was this article useful?
Click the thumbs up >
Go back 20 years and the most complex electricals on the average car were its ignition system and radio. All the battery had to do was start it.

Now, electronics control an ever-increasing array of on-board systems, even when the vehicle is switched off.

Complex security devices, pre-ignition lubrication systems and ECU sensors mean the battery must cope with more strain than ever.

And the cost of replacement is climbing.

The car parc is growing, but the volume of batteries being produced is not increasing to match, and in a consolidated market major players such as Lucas are dropping out altogether.

The excess stock of only a few years ago has dried up, and demand now exceeds supply.

Rising oil prices have made casings more expensive to produce, but the biggest effect comes from the value of lead.

This makes up around 80% of a car battery, and in turn 71% of the lead mined around the world is used to produce batteries. 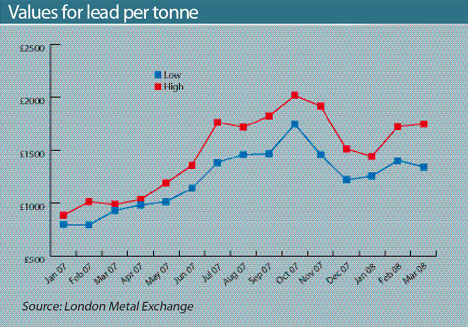 Lead values fluctuated wildly in 2007, from less than £800 per tonne in February to more than £2,000 in November according to the London Metal Exchange.

With the market so dependent on lead, the high prices have caused massive difficulties for manufacturers and suppliers.

Owen Henderson-Hamilton, product manager at Motaquip, says batteries are costing factors an average 20% more than a year ago, which is having a detrimental effect on margins.

“It’s more difficult for us to pass the increase on to workshops, because there’s more flexibility for them to go elsewhere,” he says.

“We’ve seen reduced margins in order to water down the impact of the lead price increase for workshops. It’s not about stealing market share, that can’t happen at the moment due to prices.

It’s about not losing business.”

#AM_ART_SPLIT# Higher unit costs have also reduced stock as wholesalers are priced out of being able to hold the same volumes.

And the problem is exacerbated by falling numbers of batteries imported from China as demand from the domestic market and higher prices make it easier to sell locally.

Tony Miller, product manager at Varta, says “Prices have rocketed, and it has had a massive affect on manufacturers’ ability to maintain capacity.

“Because production is more expensive, wholesalers can carry less stock, and then if you have spell of cold weather there’s not the same level of stock available to meet the demand”.

Batteries are, by nature, a crisis purchase for consumers, and large price increases could hurt sales of premium units.

“The battery market is challenging, but it’s not about price, it’s about service.

You can be either focused on shifting boxes, or give a good service and help customers to make the right decisions.”

But the lead prices are not always bad news.

With growing pressure for manufacturers to recover scrap batteries, the value of these depleted units has increased.

This has created financial incentives for customers, suppliers and wholesalers to return them. Such incentives have helped offset the unit price rises, and encourage customers to get involved with recycling.

Inevitably, though, the costs will be passed on to the end user.

Motaquip estimates a four-month delay between a hike in raw material prices and a rise in cost to customers.

Technology crammed cars will continue to drive demand for batteries, as the units are put under increased stress to power on-board systems.