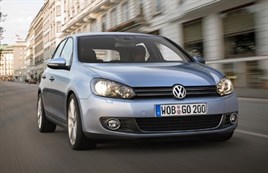 Volkswagen is shortening its model cycle in the face of fierce competition from Asian manufacturers.

Torsten Volkmer, head of VW product marketing, said: "There has been a lot of new competition in that time, not just from traditional rivals like Ford, Vauxhall, Renault and Peugeot but Korean car makers.

"Who would have thought five years ago that Hyundai and Kia would have cars that are genuine rivals to our own Golf? Then there have been new entrants like BMW's 1-Series and the Audi A3 bringing a different challenge to the sector."

Volkmer explained that VW won’t be positioning the new Golf as a rival to the 1-Series of Audi A3 as it has been designed for a much wider customer base and must still be a “classless car”.

The system differs from other hybrids as it can use either a diesel or petrol engine and both the engine and electric motor are linked to a single gear transmission.

The car will be electronically powered at low speeds, with reverse always under electric power. The combustion engine takes over with the gearbox set in fifth gear.

Development so far has been carried out using a 1.5-litre TDI engine and VW is claiming fuel consumption of 113 mpg.

VW hasn’t yet announced when the model will be going on sale in the UK but dealers should expect it to hit roads before 2010.